What on earth is a Granger, I can hear you ask. Well don’t reach for your dictionary as you wont find it there.

Quiet a few things have got me going lately but the events of this week with the budget, its aftermath and the dawning of its implications has really hit a nerve.

I never bought the “budget emergency” spin which became more hysterical with the approaching budget.

However the Abbott government has used this to introduce one of the cruelest budgets of all time. It will have a devastating impact on everyone except those who occupy the top economic domains of our society. No one will be spared and those at the bottom tier of society will be hardest hit. 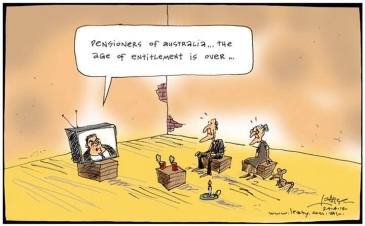 As someone approaching retirement, I am particularly concerned about the budget ‘hit’ to older workers, retirees and pensioners. Joe Hockey informs us the Age of Entitlement is over.

Sorry Mr Hockey I missed that one…never realized I was living with any ‘entitlement’ I remember the Age of Aquarius more myself.

It is an absolute affront to regard people who have worked all of their lives, paid their taxes, raised their families, contributed to communities, supported our nation though good times and bad as ‘entitled’ welfare recipients.

Many older people have lived through hard times and prior to the Keating Labor Government introducing compulsory workplace superannuation in 1992, many did not have any superannuation. By 2007, the average super for men was $87,000 and $52,000 for women. 19% of men and 26.5% of women had no super at all. (ABS: 2007)

The notion of Deputy Prime Minister Warren Truss, that retirees are ‘squandering’ their superannuation on cruises and other luxuries in not only insulting, it demonstrates just how out of touch this government is. There are many, many pensioners who live from one pay-day to another. I know how difficult this was for my own parents. If people do have some money for cruises, caravans or whatever else then good luck to them. They have earned it and do not deserve the ridicule of politicians.

The television interview with a 85 year old pensioner Vilma Ward and PM Abbott captured the nation, going ‘viral’ on face-book and twitter. If anyone can speak to the issues for pensioners it would be Vilma. She is president of the local senior citizens. Her request to the PM to meet with local pensioners was met with a nervous laugh.

So how does this government reward our older citizens?

Workers will now be required to work to 70. Something that will be nigh impossible for many, with weary bodies and jobs beyond their physical capacity. If the government is so keen to keep people engaged in the workplace, odd that the older worker tax break has been scrapped. So has the tax rebate for dependent spouses aged over 60

While Australia is rated one of the best economies in the world with a credit ratings of AAA, it is unfathomable that the government would bring such a budget . Several well-respected economists have endorsed our financial stability as has 3 credit agencies and the IMF.

The attack on the elderly is unjustified and unwarranted.

I thought Paul Syvret summed up the issue quiet well

Our self entitled patronising politicans need to remember..no-one got rich on their own:

“There is nobody in this country who got rich on their own. Nobody. You built a factory out there – good for you. But I want to be clear. You moved your goods to market on roads the rest of us paid for. You hired workers the rest of us paid to educate. You were safe in your factory because of police forces and fire forces that the rest of us paid for. You didn’t have to worry that marauding bands would come and seize everything at your factory… Now look. You built a factory and it turned into something terrific or a great idea – God bless! Keep a hunk of it. But part of the underlying social contract is you take a hunk of that and pay forward for the next kid who comes along.” Elizabeth Warren US Congress

4 Responses to I’m A Granger

she thinks. she says. she writes.

Take it and go
101 My Bucket list : Things to do before i die

TO DO BEFORE I GET OLD AND BORING OR DIE. MY ATTEMPT TO COMPLETE AS MANY OF THE ITEMS AS POSSIBLE FROM MY WISH LIST..

It's A Wonderful World

Writing about things that matter to me!

What can you do to advance equality?

Left at the Lights

A Life in Two Halves

You're in the right place